At the back of the house, there was a termite mound 2 feet high. It was two meters away from the excavation site. On the first month of construction,  while digging the foundation, one of the workers offered to destroy the mound. I asked him how much, and he said, P 15000. What?! “Kay maghalad pa ma’am. Amo gid na ang mahal kay hindi basta basta ang halad ( Because there will be offering of food. The offering is expensive).”

Yes, it is common here in Iloilo to hold the mound sacred as if some spirit lives on it or in it.I have noticed that other workers did not want to touch the mound. “Tabi- tabi lang (Excuse me),” they would say. But to my experience, the other mound (there were 2 mounds in the perimeter) were cleaned by our helper before. She pulled out the cogon grass covering it and cut the young Ipil- ipil trunks which grew on it. Nothing extraordinary happened to our helper.

I declined his offer because it was out of  budget. And it was not yet necessary.

Fast forward to the day when it was already necessary to destroy the mound. I asked the termite control guy  how much.  ” It depends on the height of the mound, ma’am.” Ok, I held my breath. I let him take a look at the mounds. Yes, at the two mounds so I can bargain for a discount. Charge? Only P3000 for each mound.

The termite control guy I talked with was the owner of the company.

Lesson learned: Talk with the right person for the job. He will charge you rightly.

The termite control guy sent three men to destroy the mound. The three men arrived a little before 9 in the morning and immediately digged the mound at the back of the house.  Alas! at 2 pm, they found the queen anay. After 3.75 hours (They had 15 minute morning break and 1 hour lunch break).

The second mound was  in front of the house  and outside the fence. Notice the mound with trees sprouting on it at the rightmost of the picture. It was wider and a foot taller. Thinking of time constraints, I thought they would destroy it on the next day. But they started digging at quarter past 3. Uh-oh. Soon it was dark. They had only the streetlights and the moon to light them. After 3.75 hours, at 7pm, they stopped. Report: No queen anay. 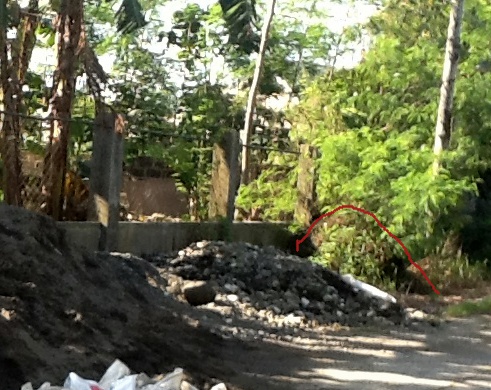 I knew the men had to stop because it was getting dark. But where was the queen? Have they dug deep enough? I called the termite control guy. He said that maybe there was no queen there anymore, and anyway, the soil from the mound was already treated. Yes, I saw that while they shovelled the mound, they sprayed something on the soil they shovelled out.  Lastly, he told me not to worry because if the mound really returns, he would destroy it for free. I consented because you can see from the picture that the mound (the red drawing was where it was before destruction) was far from the house perimeter. 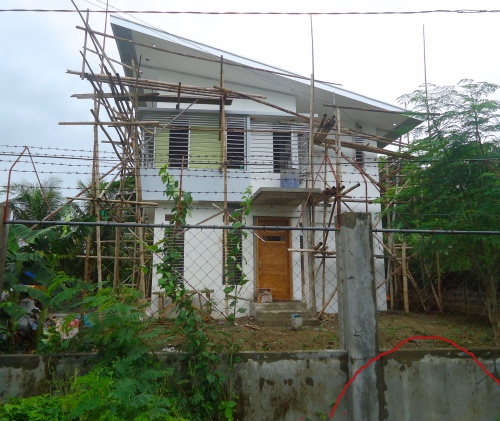 Another lesson learned: Ask for warranty for services rendered.

Aside from having the mounds destroyed, I also had the house perimeter treated with anti-anay. I used a lot of wood in my house project that I needed  preventive treatment. Prophylaxis, as what the doctors say. Will discuss the prophylaxis for anay next time. Stay tuned! 🙂

One Reply to “Lessons From the Queen Anay (Termite)”